﻿Cell proliferation in the attainment of constant sizes and shapes: the Entelechia model.

Fig. 2. Intervein sector of the wing in its dorsal (D) and ventral (V)aspects in Entelechia condition. Heavy lines correspond to anterior,posterior, and proximal restriction borders. The dorso ventral compartmentboundary is indicated by the serrate line. Cells contain two variable vectors,corresponding in length to the martial (positional) value for the X and Y axes.Cells are asymmetric in the amount of signals received from their neighbors,with higher values in the cells closer to borders. [Notice the vector polarity(bars) in a double symmetry within dorsal or ventral sectors]. Highestvalues are at the A/P and D/V compartment boundaries. Scalar differencesand their symmetries are represented in graded color. Bottom: percentageof cell division and cell death per generation.﻿ 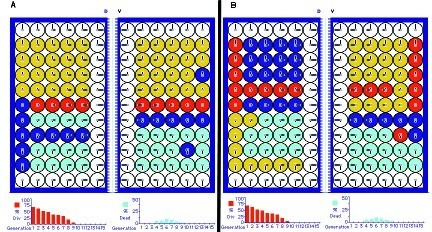 ﻿ABSTRACT The Entelechia model is a generative model of morphogenesis where individual cells exhibit surface labels that express scalar difference and planar polarity along two orthogonal axes X and Y. The amount of surface label depends on the level of Martial (M) gene product within each cell. The model assumes that the confrontation of cells on both sides of compartment borders causes an increase in their level of M gene expression. The resulting disparity between the M value of border cells and that of their neighbors induces the latter to divide. After each division the daughter cells increase their own M value, and allocate to the best matching value position. The increase in M value at the borders therefore extends through the anlage in a cascade of proliferation. The Entelechia condition is reached when the border cells attain the species-specific maximal M values, and the value differences between adjacent cells become indistinguishable. Computer simulations reveal that this model accounts for a variety of observations made on imaginal discs, e.g., 1) each disc attains a constant size in terms of number of cells, independently of the growing conditions; 2) clonal restrictions separate populations of cells which proliferate by intercalar growth; 3) dissociated cells are capable of reconstructing original patterns upon reaggregation, and 4) genetic mosaics of morphogenetic mutations show local effects that may differ depending on the position of the mutant cells in the growing anlage.﻿